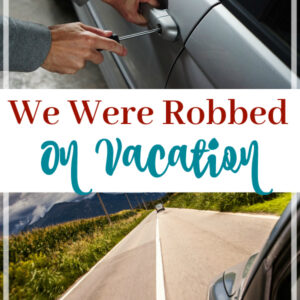 I have always been so adamant about taking precautions to not get robbed on vacation. We always empty all electronics from our vehicle. Make sure nothing that is left in our car is visible. We carry small bills. We try not to look like tourists. All the stuff you are supposed to do to protect yourself and your belongings.

My family just went to Salt Lake City. Somewhere we have visited dozens of times. I don’t know if it was the comfort of being in a place we go often, the fact that we stayed in a hotel with underground parking (so it felt like we weren’t in the open) or what…but we got careless… and we got robbed.

We were on vacation with friends several years ago and their suburban was broken into and they were robbed. I remember how much that sucked, and so since then I have always been so careful. Everything gets taken in to the hotel, or I make sure nothing is visible (which is why we built a shelf for our suburban when we prepared for our big road trip). But in Salt Lake, I didn’t.

On our last day in Salt Lake City, my husband mentioned he had gone down and realized he had left the car unlocked over night. No biggie I thought, we had all the tablets, laptop, and such in our hotel room. We had diapers in the back of the suburban, an emergency road car kit, a stroller…all still there. We were good. We thought.

It was about an hour out of Salt Lake that I went to find my ipod and realized it was missing. I thought maybe I just put it in my purse. Nope. Did I possibly put it in the glove box. Nope. It was an old school, first generation ipod so there was never even the thought it was stolen. At most, I thought maybe Mike had taken it up to the room when he grabbed the cord to charge my son’s iPad the night before and it had been left in the room.

We drove home, trying to find radio stations, and then using a playlist on my phone when there were none. Hindsight, I should have installed an app like spotify or Pandora, but that isn’t what this post is about.

It was when we were almost home that I told my husband to get his car keys. He had moved his car when we went, and now needed to move it back when we got home. His car keys were missing. He had left them in the cup holder in the suburban.

He thought maybe they were in his other pants…nope. I was starting to realize that maybe we were robbed. Maybe somebody found our unlocked, old suburban, and happened to notice an ipod and keys in it.

When We Realized We Were Definitely Robbed On Vacation

When we got home, we brought in every bag, we searched every inch of our vehicle…nothing. I called the hotel. Nope, the items weren’t left in the room.

Then I realized something else was gone. We had a small black bag (still marked as Seattle from our big trip) that had extra shoes for everyone, and rain jackets (nice ones) for all of my kids. It was missing. We had never brought it up to the hotel room. In fact, we had discussed going down and getting it the morning we were leaving because there was a chance of rain and we were all in sandals, but opted not to. Had we done that, maybe we would have noticed it was gone. Or maybe I would have assumed we forgot it at home.

It was official. We were robbed.

Luckily, the keys were for our other car, or they might have stolen our vehicle. Luckily, they didn’t take anything of value. Luckily we weren’t robbed in our home since they probably didn’t want to drive 5-6 hours to get to our house and rob us. Luckily, it was just shoes, jackets, an old ipod and keys that we have extras for.

We Got Careless. We Got Robbed Because Of Our Carelessness

The point is, we got careless. We thought we were in a safe place. We have visited Salt Lake a million times. Plus, the large LDS population tends to make you feel even more safe. We let our guard down, and we paid for it. Thankfully it wasn’t as bad as it could have been. And now, my husband will have to listent to me sing acapella on our next road trip when I don’t have my ipod and perfectly lined up playlists, and we will be doing some shoe shopping. But that is much better than it could have been.

2 thoughts on “We Were Careless and Got Robbed On Vacation”