Gavin is not only a Disney enthusiast, but has authored the book “Disneyland Secrets: A Grand Tour of Disneyland’s Hidden Details” which is filled with “Secrets even Mickey doesn’t know.”

I have to admit that Gavin got me with a few of the secrets, and I thought I knew almost everything there was to know about Disneyland.

Enjoy this article with just a few of the Disneyland secrets you will find in his book. It is a great way to prep for your next Disneyland trip so you can wow your group with all your top notch Disneyland knowledge.

Take it away Gavin:

Disneyland in California is the only Disney theme park that Walt Disney has ever set foot in. The park just turned 65 years old and is the holder of many secrets and stories dating back to the opening of the theme park in 1955.

I have always been fascinated with Disney and Disneyland which is why I started MickeyVisit.com and DisneyDose.com at age 13 and wrote “Disneyland Secrets: A Grand Tour of Disneyland’s Hidden Details” which went on to be an Amazon bestseller. The secrets and history help to make the Disney magic even more powerful.

I begin my book by sharing a quote from famed science fiction writer and one of Walt Disney’s close friends, Ray Bradbury. Here is that same quote to get you in the mood for some Disneyland secrets. After first riding the Peter Pan attraction for the first time, he sums up the magic of Disneyland saying:

“I shall be eternally grateful that you made it possible for me to fly out of a child’s bedroom window in a pirate galleon, setting sail over moonlit London, past the stars and then on to Neverland.”

Today I have pulled eleven secrets from my book to share with you as we sit here yearning for the time that we are allowed to return to Disneyland, the Happiest Place on Earth. 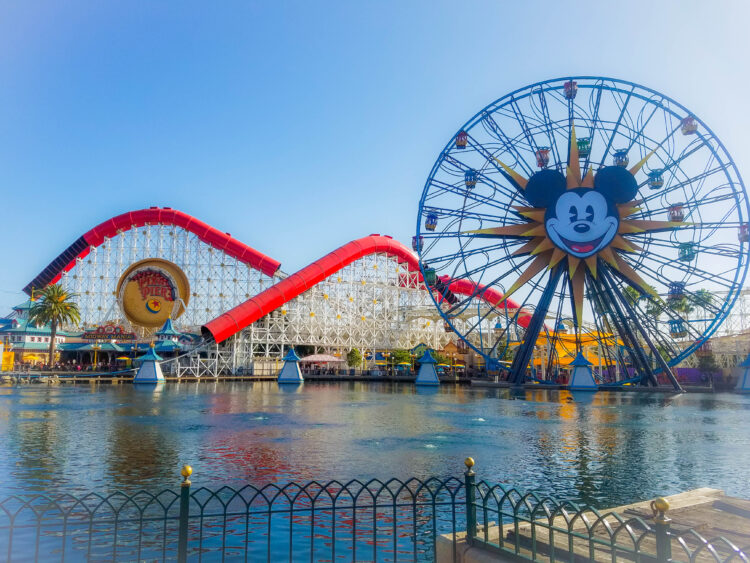 1. No peanuts or gum are sold in Disneyland.

Anaheim Mayor Charles Pearson didn’t want a dirty amusement park in his city. He voiced his concerns to Walt Disney. They both agreed that they would never sell unshelled peanuts or chewing gum inside Disneyland. This rule still holds true today.

2. The Disneyland and Disney California Adventure announcers are happily married.

Bill Rogers is the official announcer for Disneyland and announces all shows with his famous line of “Ladies and Gentlemen, Boys and Girls…” Across the esplanade in Disney California Adventure, his wife, Camille Dixon, holds the special position of park announcer. 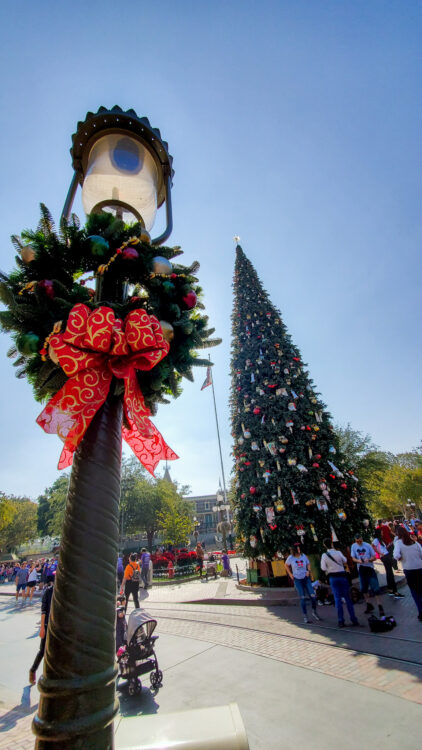 3. During the Christmas season, over one mile of garland is used to decorate Main Street.

Christmas decorations at Disneyland go up around the first week of November and are taken down the first week of January. Until 2008, a real tree from Mount Shasta graced Main Street every year. In 2008, the real tree was replaced with a huge artificial one and is still used today.

Many A, B, C, D, and E tickets are still in circulation around the coun- try. Occasionally, guests will bring these tickets to Disneyland. Guests are given the face value of the ticket, which doesn’t amount to very much, because the most expensive ticket was only 95 cents. Those trying to get value out of their tickets would have better luck selling them on eBay.

5. The back of Sleeping Beauty Castle was originally supposed to be in the front.

The Castle was modeled after Neuschwanstein Castle in Germany. One day, when Walt Disney Imagineer Herb Ryman was working on details for the model, he placed the top half of the castle on the base backwards. Walt Disney walked in and inspected the model and proclaimed that he liked the castle more than ever. If you look at the back half of the castle that currently faces Fantasyland, it was originally supposed to be the front.

6. Two of the geese from America Sings are now naked inside Star Tours.

The Audio-Animatronics from America Sings were repurposed into other attractions. The majority of the singing critters were transplanted in Splash Mountain, but a few remained in Tomorrowland, where they took up residence in Star Tours. Two of the geese were stripped of their feathers and became the G2 repair droids in the original version of Star Tours. In Star Tours 2.0, the geese were cleaned up and now run the scanner that all guests pass through as they board the ride. If you take a look at their feet, you can see that they remain webbed. 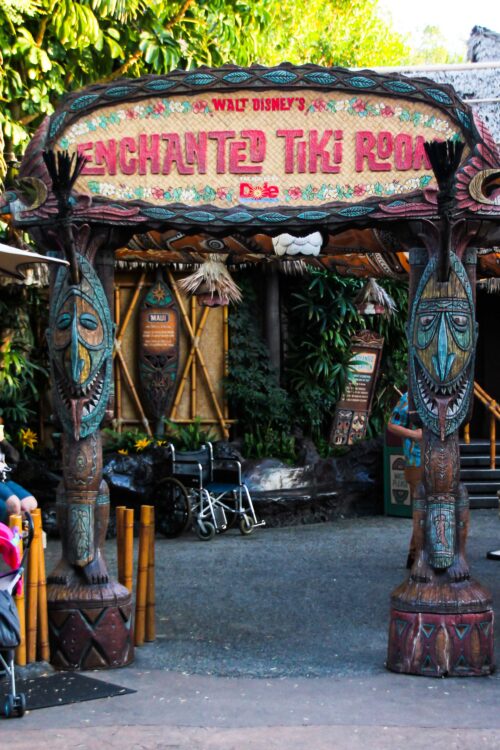 7. Originally, the Tiki Room was designed as a restaurant. Only later was it turned into a show.

The Tiki Room is one of two attractions in Disneyland that has a dedicated restroom. Not only is it a cool secret, but also a great thing to know when there is a long line at the main Adventureland restroom just across the path.

8. After that long of a walk you might need a secret bathroom in Indiana Jones (this is the second ride with a bathroom).

If you wait to ride Indiana Jones Adventure in the regular queue, you could walk more than half a mile. When the attraction first opened, the wait time was ALWAYS over three hours long. People had to go to the bathroom so badly by the time that they got to the front of the line that often they would have to leave before riding the attraction to find a restroom. So a restroom was built out of necessity. This is one of the two attractions that has a dedicated restroom.

9. The guns carried by the skippers on the Jungle Cruise can fire two types of ammo.

The “show ammo” is the quieter sound that they fire in the hippo scene. The second ammo is the “breakdown ammo” which is fired in case of emergency. Three shots indicate some mechanical problem, and four shots are sent off in cases of medical or security dangers. In this case, all of the boats will speed back to the dock to be evacuated, leaving a clear path for the boat that sent out the distress call to return to the dock. 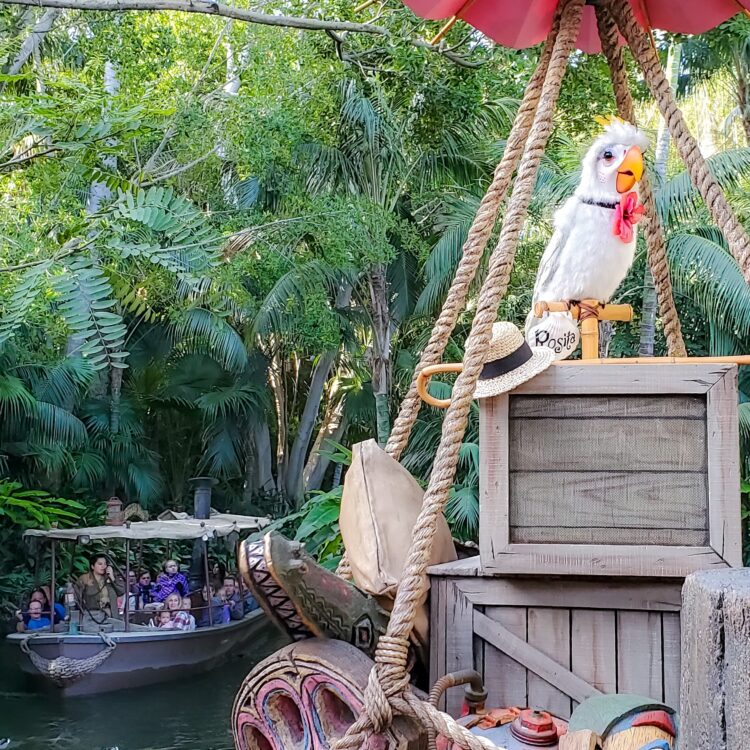 10. Mary Blair has a doll dedicated to her inside of “it’s a small world”.

Blair has long been remembered for her stylized illustrations, use of bright colors, and beautiful design work. Her art is most notably seen in Peter Pan, Alice in Wonderland, and “it’s a small world”. In 1963, Blair was chosen to lead the team that designed “small world”. To honor her work, Walt Disney had a special doll created and added to the attraction. Dancing atop the Eiffel tower, the doll has short cropped hair, blue eyes, and is dressed in a yellow poncho and boots.

11. Disney honors science fiction writer, Epcot consultant, and close friend of Walt Disney, Ray Bradbury each year during Halloween Time at Disneyland by transforming a tree outside of the Golden Horseshoe into the “Halloween Tree” to honor Bradbury and his short story with the same title.

As shared in our intro, Bradbury was an early proponent of Disneyland and helped to demonstrate to the high society world that the new theme park went far beyond the typical trashy amusement parks of early days. 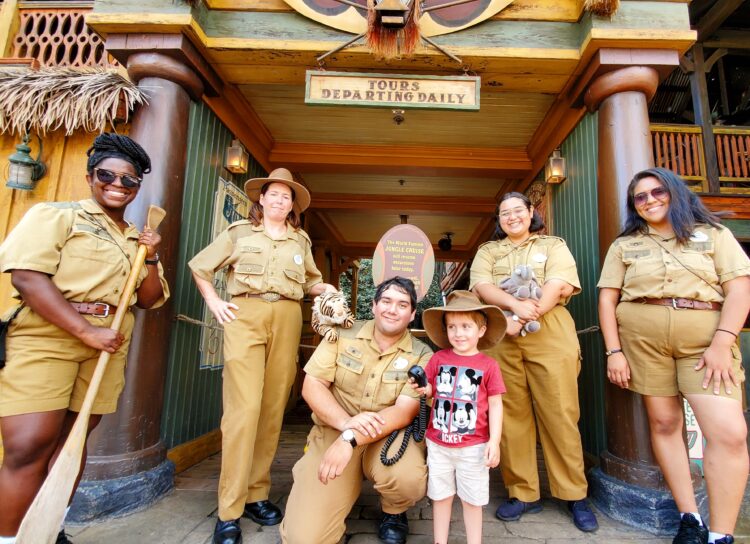 Thanks Gavin for sharing some of your Disneyland secrets with us.

Looking to book a Disneyland vacation for after the parks reopen? Our partners at Get Away Today are currently booking hotel stays and will alert you as soon as Disneyland Tickets are available for purchase once again. Be sure to check them out and use code CrazyAdventure to save an additional $10 on bookings of 2 nights or more.