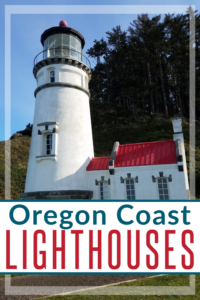 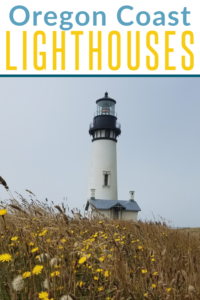 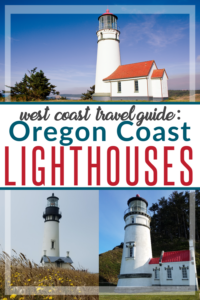 If you’re planning your next adventure along Highway 101, just off the coast of Oregon, it only makes sense that you would stop in and appreciate several of the historic lighthouses along the way. While you may be able to see them all from the highway, you’d be missing out on some incredible views and the history of the men and women that worked hard in nasty conditions to keep these iconic beacons lit.

To this day, nine of the original lighthouses in the state of Oregon still stand, seven of which are open to the public and available for you to tour, while two are privately owned. Before venturing out to witness these structures, stick around to find out more on the lighthouses that stand proud off the coast of Oregon.

I love the Oregon Coast, and over the years, between our Seattle to San Diego Road Trip and multiple Oregon Coast vacations including visits to Florence, Seaside, and Newport, Oregon and beyond, we have been able to see a good chunk of the many Oregon Coast Lighthouses.

One thing that I wish I would have been able to find though is a guide to all of the Oregon Coast lighthouses that helped me decide which ones to visit, what activities I would be able to do at these Lighthouses and more. Well, as a travel writer, when I can’t find the resource that I wish I had, I feel it is important for me to put one out for others. So here you have it… my guide to Oregon Coast Lighthouses.

I love when I can visualize where things are at, so I thought putting a map of the lighthouses would be helpful! There are lighthouses up and down the coast, so this will help you see which ones are close to your vacation destination or home town.

Now that you know where all of the Oregon Coast Lighthouses are located, you may still be wondering a little more information about each lighthouse.

Which ones are open to the public? Which ones can you tour?

Located nine miles to the north of Port Orford, this is one lighthouse destination you don’t want to pass up. The Cape Blanco Lighthouse rests 256 feet above sea level, providing excellent views of the ocean and also for whale watching. It was built back in 1870, while the Victorian home was built in 1898 and owned by the Hughes family. It’s now a part of Cape Blanco State Park, with tours available from April through October.

The current structure of Umpqua River Lighthouse was built in 1894, after the original fell into the river in 1861. It puts on a dazzling light show at night and is equally as stunning during the day. The lighthouse is 65 feet tall and is elevated to 165 feet above sea level. The museum and lighthouse itself are open seasonally and free to the public, however, from May through October, there is a fee for guided tours.

This is one of the few lighthouses that you can climb to the top, so it is definitely a popular one.

The Tillamook Rock Lighthouse sits abandoned on a giant rock about a mile out to sea, across from Escola State Park. It stands at 62 feet tall while resting at 133 feet above sea level. She was labeled “Terrible Tilly” because of the difficulty during both the construction and its operation that took place between 1881 to 1957.

Since being decommissioned, the lighthouse has been sold several times, and at one point was known for being used as a storage place for ashes of the deceased. Not being open to the public, you can still see this lighthouse from the parking lot of Escola’s Indian Beach, or taking the Oregon Coast Trail on Tillamook Head.

It has been years since we have been to see  this lighthouse. I think it is time to head back. Plus any reason stop at the Tillamook Factory is a good one.

Cleft of the Rock Lighthouse

The Cleft of the Rock Lighthouse is one of two which is owned privately and not available to the public. It was built in 1973, by the former keeper of the Tillamook Rock Lighthouse, James Gibbs. It’s a replica of the Fiddle Reef Lighthouse that’s located on Vancouver Island. Pullover to see it at mile 166 along Highway 101, in the Cape Perpetua National Scenic Area.

Cape Meares is the shortest lighthouse that you’ll find on the coast of Oregon, standing at only 38 feet tall. It’s located in Cape Lookout State Park and operated from 1890 to 1963. The surrounding area has nice scenery and opportunities for spotting whales and sea lions. Nearby there’s also the “Octopus Tree”, a Sitka Spruce that resembles an octopus upside down.

Coquille River Lighthouse is located in Bullards Beach State Park, only two miles north of Bandon. It was built in 1896 to help mariners navigate the dangerous sandbars and then decommissioned in 1939 by the US Coast Guard.

Yaquina Head Lighthouse is boasted as the tallest lighthouse on the Oregon coast. It’s 93 feet tall and rests 162 feet above sea level and still used as a navigational aid today. Many believed that the lighthouse was haunted, because the compass readings would go haywire when ships would pass by, when in fact, this was due to magnetized iron that the structure sat on. The lighthouse is located 3 miles north of Newport, at the Yaquina Head Outstanding Natural Area.

This lighthouse has a free tour but you must reserve your spot. You can do so at the visitor center for the Yaquina Head Natural Area when it opens. You will be allowed to go to the top of the lighthouse on the tour, but children under a certain age and height are not allowed on this part of the tour. You also are not allowed to carry children up or down the stairs so they will have to be able to walk by themselves.

Get to the visitor center early as when we went, we got their 30 minutes after opening and most of the tours were already full. Unfortunately, we had a large group so we were not able to all go, but those in our group that did (I sat out with our too short twins) loved it.

Another note, this lighthouse has a great area for whale watching. We were able to see several during our time here.

This lighthouse tends to have a strong cold wind. We were fine without jackets around the rest of the Yaquina Head area but even with sweatshirts, we were all freezing (in July) by the lighthouse.

The Yaquina Bay Lighthouse is the only Oregon lighthouse that has the light and the living quarters in the same structure. It was built in 1871 and only served for three years. The lighthouse was replaced by the Yaquina Head Lighthouse in 1873 but is still open to the public.

This lighthouse is really cool, but very small. We had to climb up a lot of stairs and a long path to get to it. I am not sure if there is an accessible route to this lighthouse.

There is a self guided tour, and while you cannot go all the way up to the light, you can go up to the sleeping quarters for the watchmen.

While this lighthouse was only in use for a few years, the history of the structure is really interesting.

The light given off of Heceta Head Lighthouse can still be seen today, over 21 miles out to sea in fact, making it the strongest light on the coast.

The lighthouse was built in 1893, standing at 56 feet tall and resting 205 feet above sea level. You’ll find it 12 miles to the north of Florence, Oregon. Today, it’s used as a bed and breakfast and considered to be one of the most haunted places in the United States. It also has limited daily touring options as well.

This lighthouse is about 1/2 mile up the mountain from the parking lot at the beach. The beach area is nice and quite and very picturesque.

he incline on the hike up is gradual, so it didn’t feel daunting for my family, but when we returned later in the year and took family, a few of them struggled.

The gift shop is located about 2/3 of the way up the trail and then you go a little bit further to get to the lighthouse. The views from the hike up are amazing!

The Cape Arago Lighthouse is one that’s not available to the public, but you can see it from Bastendorff Beach, South of the Sunset Bay Campground, 12 miles southwest of North Bend. It was built back in 1934, replacing its two predecessors that fell victim to weather and erosion. The lighthouse was in operation until 2006, and its Fresnel lens was moved to the U.S. Coast Guard Air Station in North Bend.

Located in Brookings, at the mouth of the Chetco River, the Pelican Bay Lighthouse was first used in 1999 by the US Coast Guard. It rests at 141 feet above sea level. The attached residence is presently owned by the Cady family, but you can still see it from the beach jetty.

We happened upon this lighthouse during our Seattle to San Diego Road Trip. We ended up stopping at a picnic area for lunch as we made our way down the coast that was near this lighthouse. Due to time restraints we were not able to stop and take pictures. Next time.

When you visit, make sure that you stop in and see at least a handful of these beauties. You’ll come away with an appreciation of how far we’ve come with navigation and a better understanding of all the hard work and effort went into keeping mariners safe along the treacherous and rocky coastlines. If you’ve visited any of these lighthouses before, tell us about your experience and trip down Oregon’s coast.