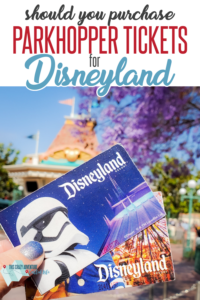 Before you can decide if parkhopping at Disneyland is the right choice for you, we should probably cover the basics of parkhopping. I will try and break it down as best as possible here, but if I miss something, be sure to leave me a comment so I can add it.

What is Parkhopping at Disneyland?

The first thing that we need to cover is what is parkhopping?

Parkhopping is the ability to visit both Disneyland Park and Disney California Adventure Park in the same day. In order to do this, you have to purchase a Disneyland parkhopper ticket.

If you have a one park per day ticket, for multiple days (because one day is never enough!), you can still visit both parks, just not both parks on the same day. Instead, each morning you would need to decide which park you wish to enter. Once you have entered that park, that is the only park you can gain entrance to, unless you stop by a ticket booth and add the parkhopper option to your ticket.

How much does adding Parkhopper cost?

All magic comes with a price, and the magic of visiting two parks in one day is no different. At this time, parkhopping is an additional charge of $60/ticket. It doesn’t matter how long that ticket is for. A one day ticket and a five day ticket both require an additional $60 to parkhop. (Pssst – if you are only going to Disneyland for one day, don’t parkhop.)

Because you pay the same price for parkhopping, whether for one day or five, you cannot only upgrade one day of your ticket to a parkhopper. This is a common question we see in my Disneyland Facebook group.

Money Saving Tip: If you want to save on your Disneyland tickets, whether one park per day or parkhopper, I suggest buying through my partners at Get Away Today. They offered discount theme park tickets, hotel stays and more.

How Does Parkhopping Work at Disneyland with Reservations?

When Disneyland reopened, one of the changes that the park made was that you now need park reservations. The other is that parkhopping is not allowed until 1 pm each day.

When Making Your Park Reservations

After 1:00 pm you can go back and forth between the two parks as much as you would like until one of the parks closes.

How easy is it to Parkhop?

One question that a lot of people have is how easy is it to parkhop. At Walt Disney World, switching parks can take a good chunk of time our of your day, but at Disneyland, parkhopping takes only a few minutes.

Disneyland and Disney California Adventure are right across from each other, separated only by the esplanade where the ticket booths are located. Parkhopping is a breeze at these two parks, so don’t let distance keep you from upgrading to a parkhopper ticket for Disneyland.

Is there a limit to how often you can parkhop at Disneyland in one day?

A few people have messaged me asking if there is a limit to how often you can parkhop in one day between Disneyland and Disney California Adventure parks. The answer is no. Disney does not limit how often you can go between the two parks when you purchase a Disneyland Parkhopper ticket. The only limit at this time is that you may not parkhop until 1:00 pm.

The only limitation would be if one park hits capacity, Disney may temporarily stop you from entering that park, even if you have already been there that day.

Tips For Parkhopping and Mistakes to Avoid

Now that you know the basics about parkhopping, let’s talk about strategies, tips and yes, even the mistakes people make when parkhopping.

Before we get into this, just a reminder that everybody has a different touring style for the parks, so while I may call one thing a mistake it may still work for you, or a tip may not apply to you. I will try to note when I think there may be an exception.

Parkhopping at Disneyland should have a strategy to it

If you buy a parkhopper, you should still plan on having a touring strategy. Always go in with a loose, flexible plan. You want to make sure that if you chose to parkhop you are doing so to your benefit.

This tip is kind of funny because one reason I love parkhoppers is that I have the freedom if I am “not feeling” one park, I can go to the other. But, I am at Disneyland a lot, so my days may be a little bit more laid back, or focused on coverage I need to get, than the typical Disneyland guest.

In general, when I am visiting Disneyland with my family, I like to think of Parkhopping as blocks of time in my day. I like to spend a few hours in a park before I head to another one.

Parkhopping in between every single ride will do two things… waste valuable time and exhaust you from running back and forth between parks.

If you can at least go a few hours between hopping parks you will get a lot more done in your day. This is a lot easier now with the 1:00 pm time restraint. It makes it easy to break up the two parks.

Genie+ is Disneyland’s upgraded MaxPass service that allows you to use a faster queue line (Lightning Lane – fka FastPass lane) on certain rides in the park. Make Genie+ selections on the Disneyland App.

While many people may find it necessary to choose between purchasing Genie+ or parkhopper, the best bet to utilize both these options is when you buy them together. My friend Leslie was able to ride every single Genie+ attraction in both parks in one day, which maximized her time. We talked about it in our Genie+ Review Podcast Episode.

Genie+ allows you to obtain return times in the other park once you can parkhop. This is great for those of us with Disneyland Parkhopper Tickets.

But in order to make this work the best, you will need to be strategic, trying to obtain return times at the right time to get several in one park in close proximity so that you are, again, not parkhopping between each and every ride.

Parkhopping at Disneyland with young kids

A big question that parents of young children have is, should I parkhop with young kids?

In the Disneyland with Kids Facebook Group (which you should totally join if you aren’t already a memeber) we have found that many of our members with young children in the infant to toddler age range prefer not to parkhop, or if they do, they prefer to parkhop only once per day. Often times, they use lunch as the opportunity to switch parks.

I have to agree with this. When our kids (especially our twins) were infants, all the way up until about the age of 4, it was just easier to stay in one area, park the stroller and do a bunch of stuff before moving.

We would often break for lunch, either using Disneyland’s picnic area or heading back to our hotel, and then when we were ready to go back in the parks, we would hit up the other park.

Even now, with my twins being 6 and my oldest 11, we will follow a similar strategy, or spend an entire day in one park. But since most days we do prefer to change parks at least once, we stick with parkhopper tickets. (Remember, it is the same price whether you upgrade for one-day tickets or multi-day tickets.)

Be careful when you upgrade to parkhopper

If you have already purchased Disneyland Tickets, but you are now wanting to upgrade to Parkhopper, be careful when you do this upgrade.

With the new reservation system, changing your ticket to a parkhopper will require you to make new park reservations. It is important that you verify if there are parkhopper reservations available before upgrading.

If possible, just start with parkhoppers if you think you will want to use them. It has been a large area of frustration for many of my readers and group members when they decide they suddenly want to parkhop.

I hope this answers all of your Disneyland parkhopping questions. If I missed something, be sure to leave a comment or come ask it on Facebook!